How The Founder of Dope Magazine Got Me High 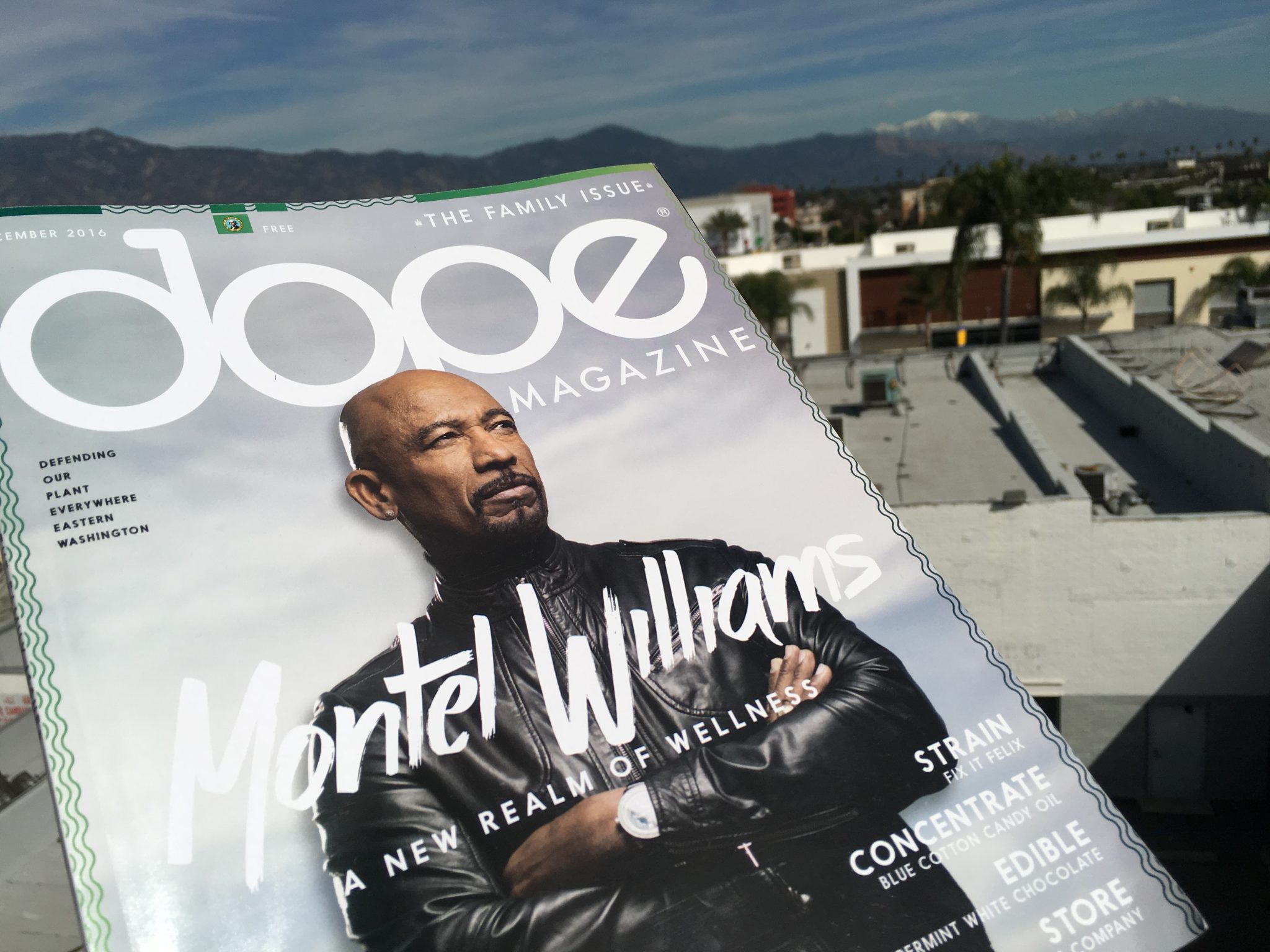 The CannaCool Lounge was an Award show honoring Emmy Award-winning TV personality Montel Williams. He was presented with a Lifetime Achievement Award for using his celebrity status to bring awareness to medical marijuana for the treatment of chronic illnesses. Montel has used cannabis products to effectively manage the symptoms of his Multiple Sclerosis (MS) since his diagnosis with the disease in 1999. The online event mentioned guest appearances by Ludacris, Method Man, Red Man and Morgan Freeman. Sadly, none of them were there. Aside from being bummed about that, the night was amazing. 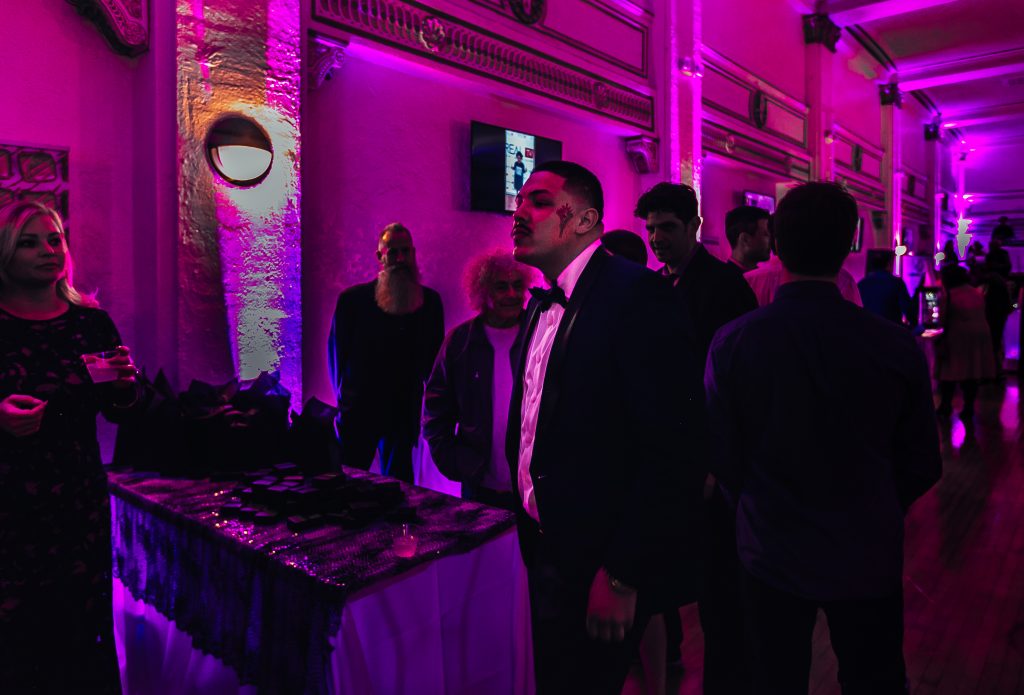 It was kind of cool walking into a professional event and seeing everything related to cannabis: the vendor booths, people smoking vape pens and photo-shoots with weed logos. This cannabis event was held at The Casa Vertigo, a posh 2-floor space located in Downtown Los Angeles, a much nicer venue than what I anticipated. This is only because marijuana related events are still in a little grey area, so you’re more likely to go to events at private locations or warehouses. 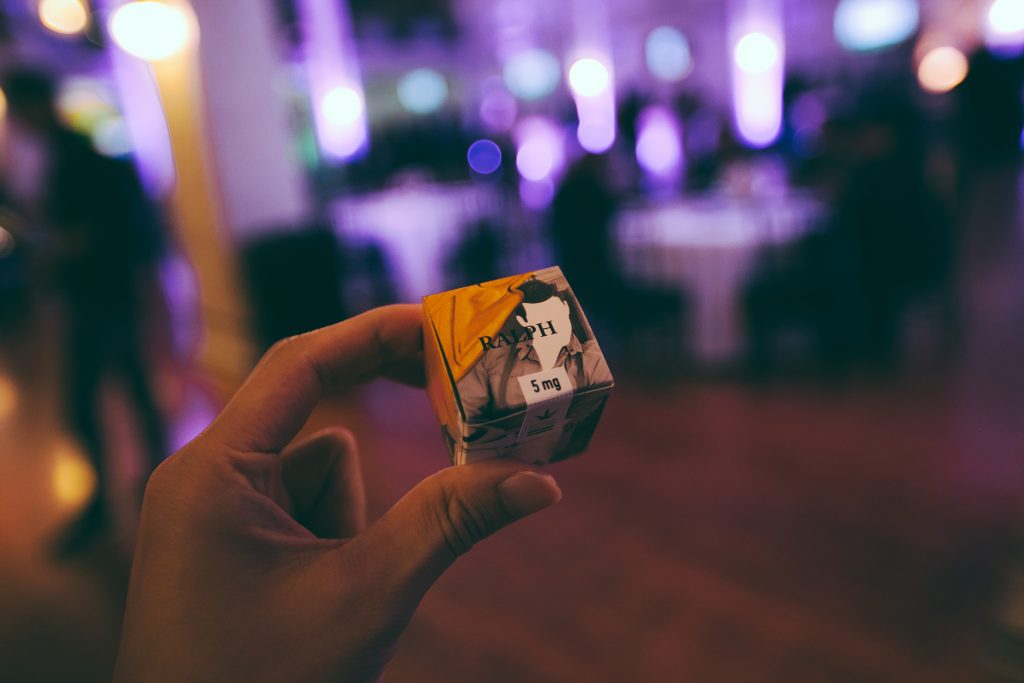 I started my rounds by talking to the vendors. I had great talks with the Justin of Lenitiv Labs, which is the product founded by Montel Williams. He offered me a sample of the product, but I told him, “I’ll come back”. I’ve never really been high in a professional environment before, let me network and talk to some people first. The last thing I want to be is silently stalking the hors d’oeuvres lady.

To Whom it May Chocolates really caught my attention, and I had a great talk with the owner, Tom. I really pay attention to branding and packaging. The cannabis market is so new, you don’t know what the quality is inside until you try it, so you have to rely on recommendations and design when deciding. I really felt he had something going on with his brand. Tom mentioned that aiming to be a premier brand still has many challenges. The average consumer is still just looking for known strains (of cannabis) for a low price. It’ll take time to develop a taste for higher-end brands. 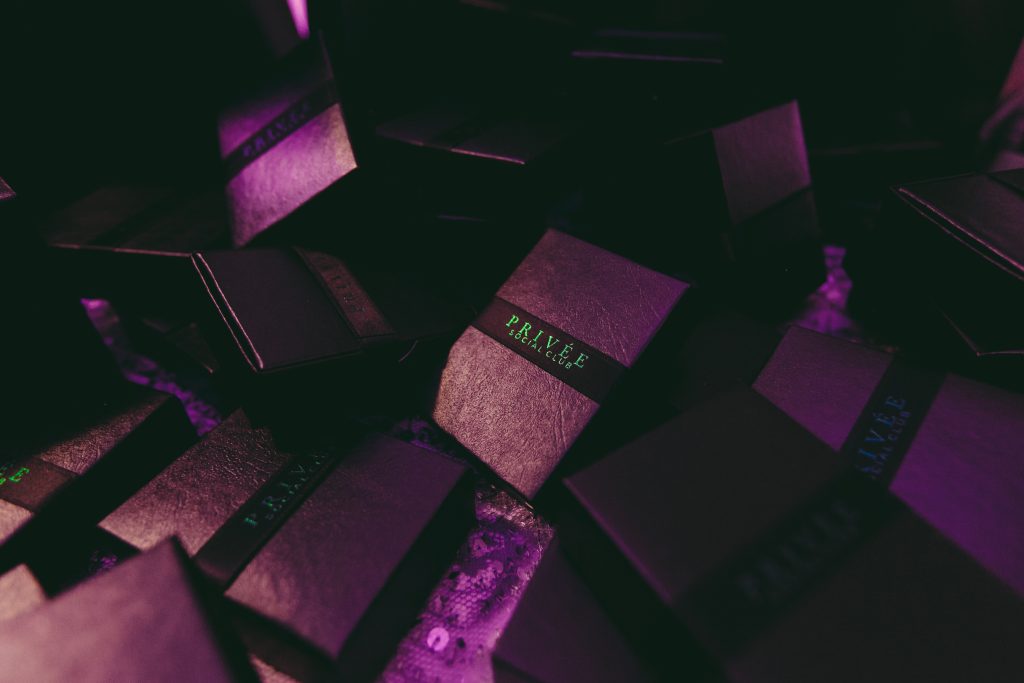 I took a break from talking and had a drink beside a standing table. I saw an opened box lying there and I picked it up to see what it was. Within a couple seconds a lady comes up to me and asks if I opened this box. I told her no, and she responded “These are not meant to be opened…” she takes the opened box and walks off. I wanted to ask her some questions like what it was all about, but I hate awkward situations so I avoided her for the rest of the night. But jeebus, what’s in the box??? 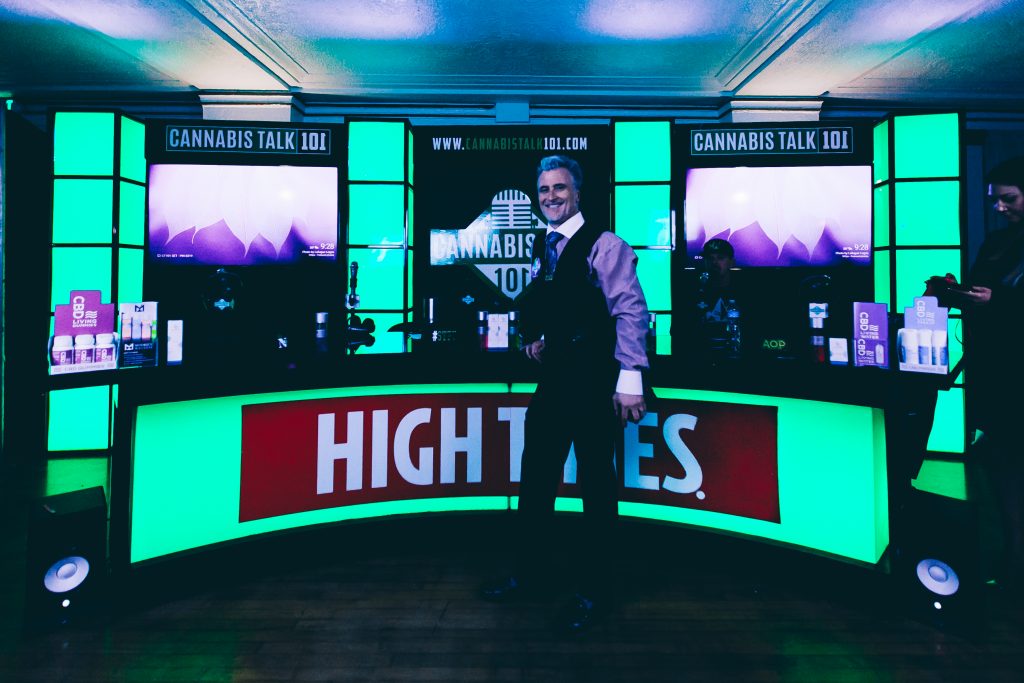 The event also had cool things like a live radio/podcast show. I’m a fan of podcasts so I  went to speak with Marc from the Pot Brothers at Law, he is one of the co-hosts of the Cannabis Talk 101 radio show. I knew nothing about the show, I had only seen them once at the High Times event, and I thought Marc was the host because his look and style really stood out. What I learned is that the “Cannabis Talk 101” show is the only Cannabis radio show that goes live on FM Radio (KOCI 101.5 FM). Starting a podcast interests me, especially being in the media world, so I asked Marc how he got into it. That’s when he told me he was a lawyer, and “you can’t get me to shut up”. The radio company actually approached him and he said it was just a natural fit. I was hoping an epic fight against The Man, a built-up-from-nothing story, but hey, that’s just the way it is. I guess what I can learn is that if you do an awesome job in your profession and find a away to stand out, more opportunities will just come to you. Marc definitely does a really good job standing out.

Still sober and having engaged in lots of great conversation, I happened to make eye contact with the only other Asian dude in the room. Right away I knew exactly who he was. One of my damn Cannabis idols! Father Tran, CEO of Dope Media! The amount of Asian Americans in the legal Cannabis scene is very small, so I’m aware of who most of the Asians are in the industry. More importantly, there is a lot of inspiration to gain when someone of color makes it, like when Obama became president. I don’t believe straight-up racism is happening, but I do know that there are certain challenges we have to overcome, externally and internally. Therefore getting a chance to speak with him would be very special, but what should I say? 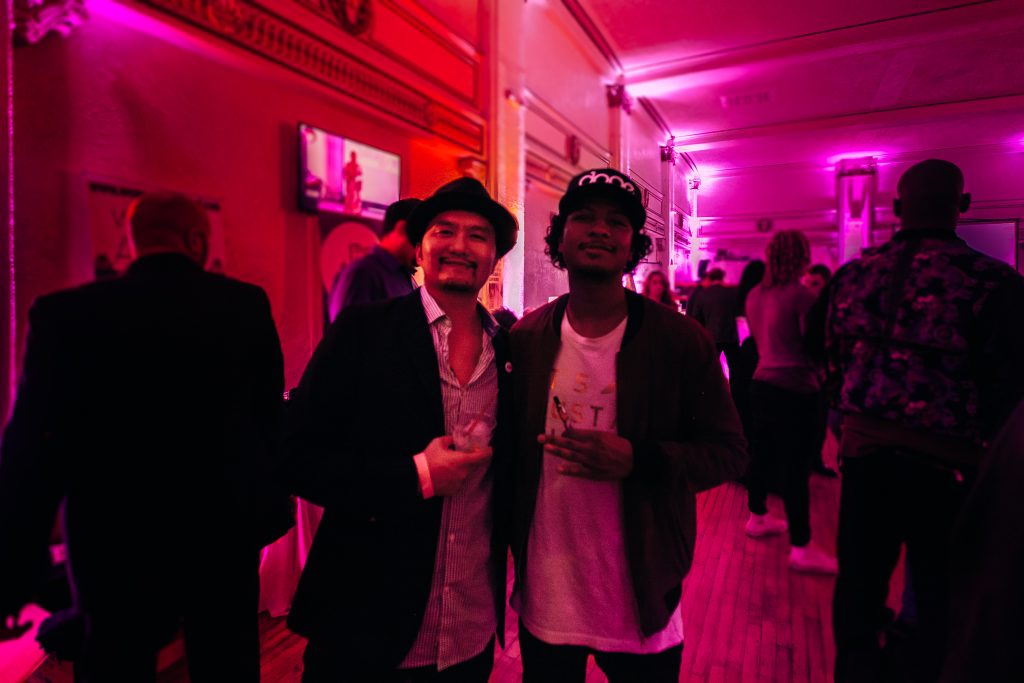 Before I could think of something, David approached me, and asked if he knew me from somewhere? I told him probably not, but I did know who he was and I’m a fan. If you heard stories of people meeting their idols only to find out they are total jerks, this was not the case. David was very friendly, he just kept sharing great advice with me. One of the most important things he told me during our conversation was, “Listen, I’m not smart. I just found really really smart people working with me”. He told me how he wasn’t good with numbers and it’s something that I relate to since I got 12% in high school Calculus. He added that he knew what his skills were, one of them: bringing people together.

What was most inspiring though, was his overall charisma and character. He walked the walk. I can see how he is a power connector and how well he deals with people. He makes you feel good when you’re talking to him; I can feel the confidence, energy and passion for what he does. I know Dope Media HQ is in Seattle so I asked him how long he was in L.A. for, he told me he’s flying out tomorrow morning. He had a bunch of meetings in L.A. all day, has this event, and then flies home. “I just gotta keep it moving” he said while snapping his fingers. It wasn’t BS, this is how people at high-levels operate. They are excited about what they do and ready to get on to the next job. That memory still sits fresh in my head. 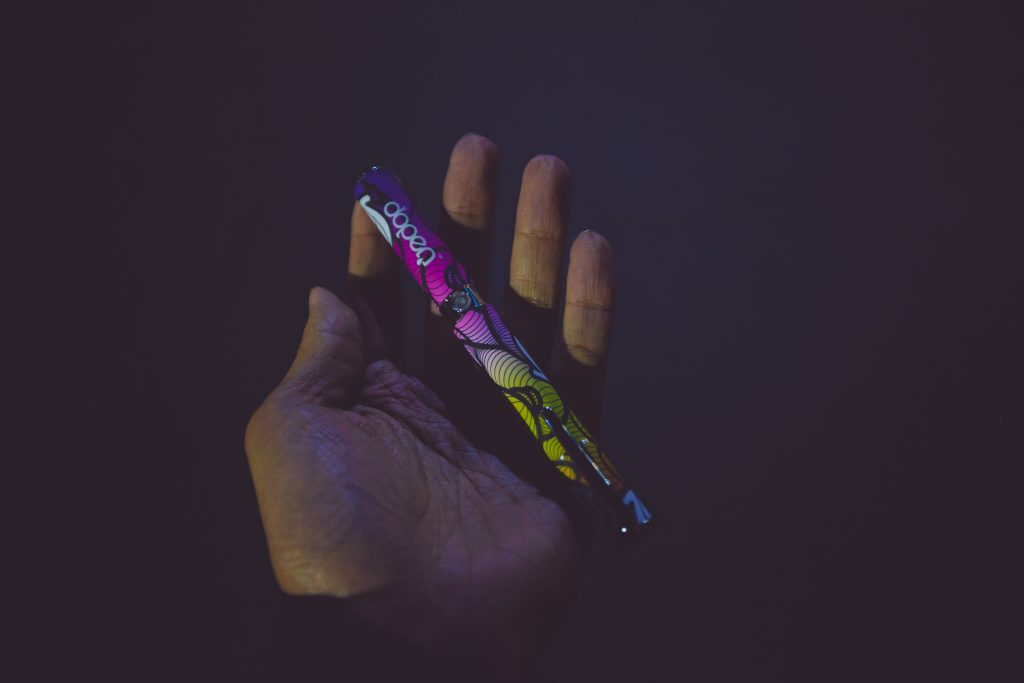 He softens his voice a bit and asks me, “Do you want a hit of this?”. I look down at his hand. What is this he is offering? I was genuinely confused. A colorful stick, is that candy or vapor? I realized it’s a vaporizer while staring at it too long. As I mentioned, I wanted to smoke at the end of the evening and it was only half way through the night. But the CEO of Dope just offered to smoke some sort of customized vapor, hell-fucking-yeah I’m going to toke with him. It’s a damn honor, like clinking glasses with a brother. He shows me how it works, and I accidentally take a massive rip. That shit hit my lungs like a Zangief Spinning Piledriver to my chest, no joke. I didn’t realize how strong and smooth the pull was. I’ve only been smoking these cheap disposal pens. I let out a huge cough and walked it off a bit. So much for holding it down, as a veteran smoker I looked like a damn rookie.

David was kind enough to offer a photo with me and we talked a little more. But what I was afraid would happen, happened. I had at least 5-6 other topics I wanted to discuss. I forgot most of them, I started questioning if I should ask this or that. Damn… I was feeling it quick. That had to be some +80% THC, because there’s no way one hit can make me feel like this. We talked a bit more about the city of Vancouver as I got sloppier and sloppier. Then one his videographers came to ask him something. I was tripping balls, so I politely just asked for his contact and thanked him. I wanted to tell him he really inspired me. 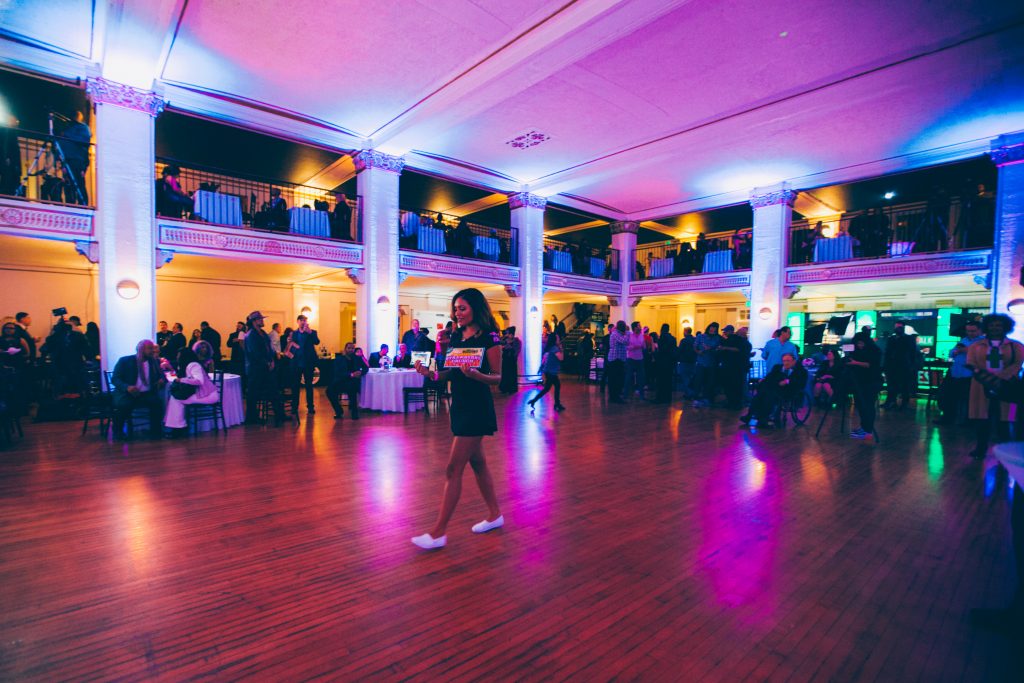 The CannaWalk was a fashion show for products. It helped calm down my high. I didn’t have to talk and I could just watch attractive women walk up and down while holding marijuana products. This is great, usually the first 30 minutes is when you trip the hardest anyway.

Montel Williams was also presented with a video, his award and he spoke to the crowd a bit. He talked about his past, his mission and what he hope to do with medical marijuana. It was a really good speech, but the drinks were flowing, people were smoking and it was a social event. The people on the 2nd floor didn’t really know what he was saying, and the noise was pretty loud coming from the balconies. So Montel goes on a small rant: “…I’ve been putting work into this for 17 years, it would be nice if you show me some damn respect and SHUT UP!!!” the crowd applauded and the noise simmered down. Wow! Respect. I would not be able to handle that situation the way he did. I don’t have the balls or confidence to do something like that. So I asked him later where that confidence and fire comes from? He told me, “It’s how I was raised, coming from tough neighborhoods, I have no choice [but] to stand up and speak up.” I wonder if its too late for me. 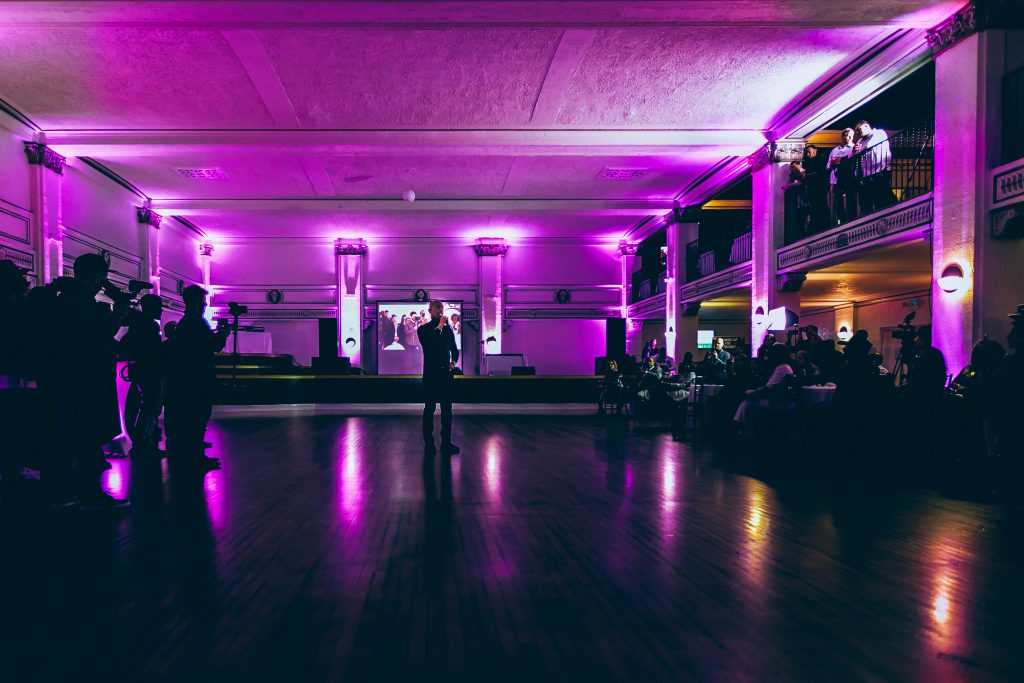 I ended the night off by talking to a few more people, but mostly chilling out. I wasn’t as ripped and actually had a really good talk with one guy who quit his job to run his startup. The product he’s creating has to do with a lot of research and data, begot by his background is in statistics. He’s teamed up with a couple doctors to build a product that collects data. It was a very smart product, and I’m quite proud that I held down a conversation with him. I felt I asked some decent questions and didn’t end up talking about space cakes. He really wanted to talk to Montel Williams about his MS because it’s related to what he does. I told him that I talked to him earlier, you really just have to force your way in there since everyone wants to talk to him. So we stalked him out a bit and managed to get a talk with him. As they conversed I went back to my man from the beginning of the night. “You’re Back!” he said, “Yes, yes I am”. He hands me a huge vaporizer, and warns me to take a light hit no more than 2 seconds. “This vaporizer is very powerful” he said. Most people don’t know how to smoke it and they end up coughing a lung out. I couldn’t help but laugh knowing that if he told me this before, I wouldn’t have left my lung on the floor in front of David. 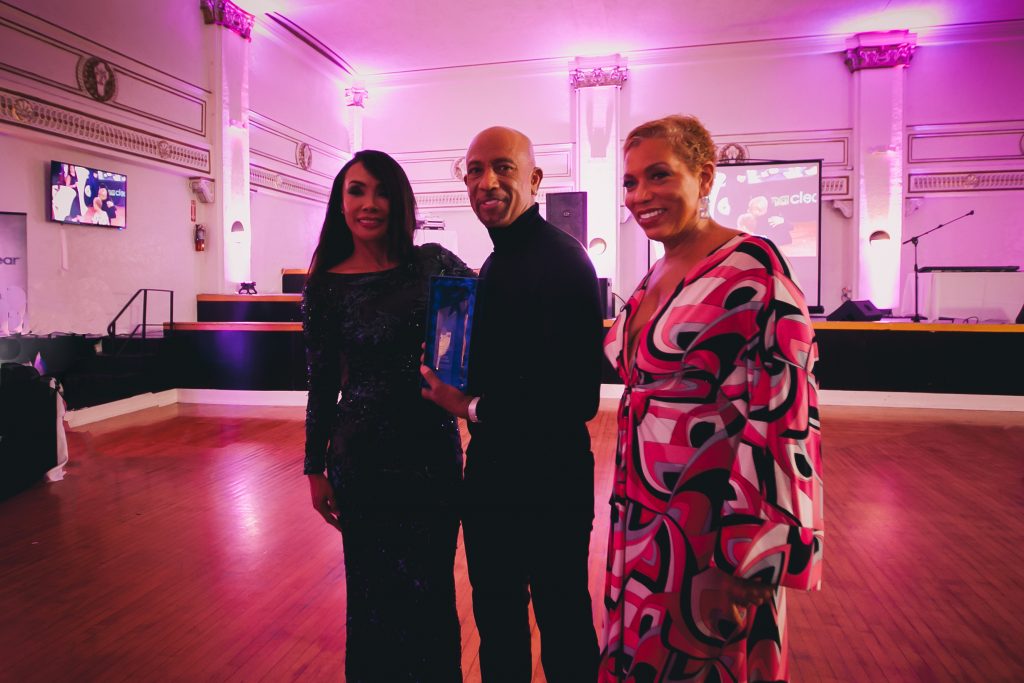